Ash Dale Wins Employee of the Month for March 2018!

Congratulations Ash Dale, who has won Employee of the Month for March 2018!

Ash has worked for SG World's recently acquired business, The Printing House, for 5 years and was promoted to Finishing Manager last year. Ash is the first member of The Printing House to win this award, after being voted for by both The Printing House and SG World colleagues - a fantastic representation of two companies coming together, with people like Ash making that union happen.

When voting for Ash, his colleagues and friends mentioned not just what he does but how he does it. He regularly stays late and volunteers for extra work, doing these things with a positive can do attitude, as well as working hard to motivate his team and build new relationships with his SG World colleagues. 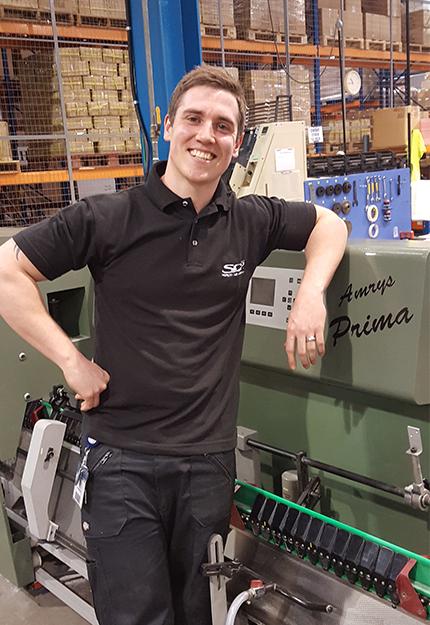 Ash's colleagues at The Printing House have always been fond of his cheery nature and he has quickly become equally well-known for this with his new SG World colleagues! As well as being friendly and approachable, Ash likes to keep his team motivated with lots of laughs, plenty of cheeriness and a bit of light-hearted competition. Ash is a bit of a gym and fitness fanatic you see, so he and his colleagues (especially Jay and Ant) have been known to have press-up competitions once the working day has come to an end. This is good though because we've been told that 'Ash'll eat anything, especially cake!'

Ash is a real family guy and has a close circle of friends who he loves spending time with. He got married to his lovely wife, Laura, last year and he'll no doubt surprise her when he says that after winning Employee of the Month his wedding day is now the second best day of his life. We're only joking Ash!