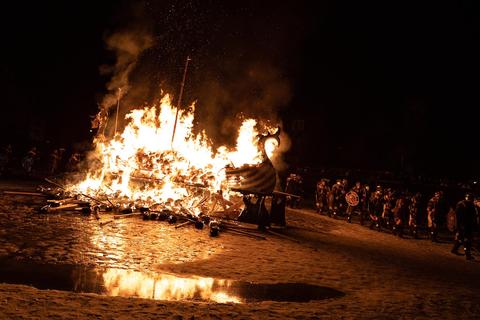 Good question, we were only made aware of the Up Helly Aa festival because Jacko in Marketing's wife hails from Shetland.

Up Helly Aa takes place in Lerwick on the last Tuesday in January every year. The day involves a series of marches and visitations culminating in a 1000-strong torch-lit procession and the burning of a replica Viking longboat. Whilst the torches and burning might raise a few safety challenges, these relatively modern rituals actually originated to replace the older, more alarming yule tradition of tar barrelling. Squads of young men would drag barrels of burning tar through town on sledges, making mischief, damaging property and raising concern over levels of drunkenness.

Today, Up Helly Aa is a spectacle which attracts thousands of visitors across around the globe, combining fire, fun, feasting and fancy dress without any safety mishaps. What a great way to beat the January Blues

Previous article Asset Inventory: Audits, Assets and Alpacas
Next article Avoid Speed Dating in 2020
We are open Monday to Friday from 8am to 4pm. Give us a call on 01270 588211