Health and Safety and Millennium Falcon are not words you would expect to see together in one sentence. The legendary “hunk of junk”  that made the Kessel Run in under twelve parsecs might have evaded the wrath of the Empire but not the HSE.

Sentencing has been adjourned until October in the case against Foodles Production (UK) Ltd, the Disney subsidiary which last month pleaded guilty to two of four criminal charges, following an incident in June 2014 in which  Harrison Ford was sustained serious injuries and a broken leg after being struck by a heavy hydraulic metal door on the set of the Millennium Falcon at Pinewood Studios. 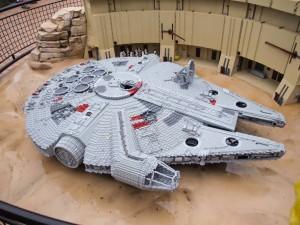 Foodles had previously admitted two of four criminal charges at Milton Keynes Magistrates’ Court, with the other two charges being withdrawn, after it accepted that it failed to protect actors and staff.

Prosecuting, Andrew Marshall told the court Ford had gone through the door on the set and hit a button before starting to walk back through it, believing the set was not live and that it would not close. But it was remotely operated by another person, and as Ford passed underneath it, he was hit and pinned to the ground.

An HSE spokesman who compared the power of the door’s drive system “to the weight of a small car”, said it was a “foreseeable incident”.

Richard Nichols said “this is obviously a high profile case which draws attention to the importance of risk assessing injuries caused by a moving door, gate or barrier.”

Adding: ”SG World provide bespoke risk assessments for all sorts of equipment in many languages but we’ve never to my knowledge produced anything in Wookie.”

Previous article Editorial Correction - H&S Breach Case for Millennium Falcon Adjourned
Next article Keeping the Kids Safe on Holiday
We are open Monday to Friday from 8am to 4pm. Give us a call on 01270 588211