During November each year, Movember is responsible for the sprouting of moustaches on thousands of men’s faces in the UK and around the world. The aim of which is to raise vital funds and awareness for men’s health, specifically prostate cancer and other cancers that affect men.

On Movember 1st, Mitch Wellings, Joe Hirst, Kieran McEllin and Ryan Beech from the SG World Outbound Sales,  left their clean-shaven profiles behind to groom, trim and wax their way into the annals of fine moustachery. Mitch decided to really go for it with the Winnfield - a tash reminiscent of the policeman from Village People whilst Kieran has gone for the more sophisticated Shakespeare. Sadly Ryan is still struggling to get past the tricky initial bum fluff stage. 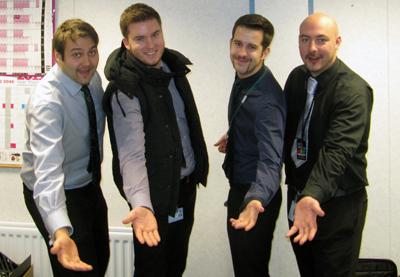 Despite the legendary sex appeal of moustache heroes such as Clark Gable and Tom Selleck, the guys are finding a burgeoning moustache is more likely to attract stray food crumbs than the ladies. “My girlfriend hates it”, said Kieran, “I’m actually quite enjoying winding her up about making it a permanent feature.” Some of the guys personal tash heroes include Einstein and Johnny Depp.

“The thing that attracted to us to Movember was the whole fun element, there’s a lot of momentum behind the campaign, it’s good to see sports stars such Jenson Button joining in to raise the profile. I’d like to see it become a national institution” said Mitch .

These five finely ‘tashed features have effectively become walking, talking billboards around the SG World office for the thirty days of November. They are raising awareness by prompting private and public conversation around the often ignored issue of men’s health. The funds raised in the UK support the number one and two male specific cancers - prostate and testicular cancer.The funds raised are directed to programmes run directly by Movember and their health partners  - The Prostate Cancer Charity and the Institute of Cancer Research.

Previous article SG World Communications Director Contributes to Community Radio
Next article Fork Lift Truck Association Safety Figures Released for 2011
We are open Monday to Friday from 8am to 4pm. Give us a call on 01270 588211