St Oswald’s CE Primary School is a vibrant community school located in Hebburn, Tyne on Wear with just over 200 pupils aged 4 – 11. Serving a disadvantaged local community, the school was ranked good with outstanding features by Ofsted after its last inspection. St Oswald’s prides itself on being a listening school with an approachable staff and a caring family ethos.

A customer since January 2010, St Oswald’s used SG World’s ID cards to identify visitors and staff on-site. Sales Executive Andrew Stidwell visited the school in November 2011 and found the administration looking for a solution to stop persistent late arrivals. He said: “St Oswald’s had a standard exercise book which late arriving pupils would sign into. They would send a form letter home to the parents, but the school felt this method wasn’t having sufficient impact combating lateness and improving on-time attendance.” 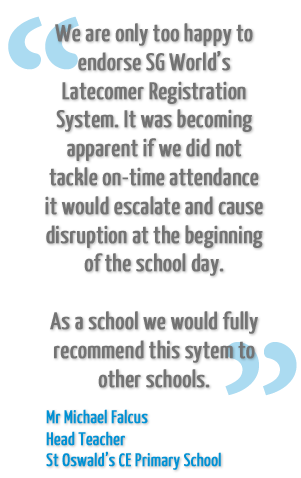 This is where SG World had the solution. Andrew proposed a Latecomers Registration system to the school. Comprised of a custom-branded register and tear-off slips and kept in the school office, the system offered a convenient way to record and track late arrivals. The system also appealed to St Oswald’s because the slips, which are directed to the parents or guardians, contain information about the carer’s legal obligations to ensure on-time attendance and the potential repercussions for persistent lateness.

Andrew said: “While the administration was aware of the legal actions that could be taken against parents who persistently brought their children in late, the letters they sent home weren’t bringing that point across. The Latecomers system provided a comprehensive and clear summary of the parents’ obligations in the form of an official notification with the school’s branding and logo.”

In the ten months since introducing the Latecomers system, St Oswald’s has noticed significant improvements in on-time attendance and a decrease in habitual lateness.

“The introduction of the lateness slip has had a tremendous impact. It is unobtrusive, yet gets the message across to parents,” Mrs Norma Ball, School Secretary, said.

The SG World solution is especially useful to primary schools with the changes to the Ofsted Inspection Framework announced in January 2012. Behaviour and safety of pupils is one of the four areas on which Ofsted inspectors will now focus their judgements. In the published framework, Ofsted states its inspectors will specifically consider “pupils’ attendance and punctuality at schools and in lessons” when evaluating behaviour and safety.

“We are only too happy to endorse SG World’s latecomer registration system,” Mr Michael Falcus, Head Teacher for St Oswald’s, said. “We did not have a serious problem with lateness, but it was becoming apparent that if we did not tackle on-time attendance it would escalate and cause disruption at the beginning of the school day. As a school we would fully recommend this system to other schools.”

Previous article Case Study: Queen's College, Oxford - Contractor Control
Next article IMHX 2016 - A Digest for Health & Safety Managers
We are open Monday to Friday from 8am to 4pm. Give us a call on 01270 588211