It was a clash of the Titans – the Sales and Marketing (S&M) team versus the rest of SG World (ROSGW) met on the hallowed turf for 60 minutes of thrilling ball play. Roving player, Richard Nichols swapped teams at the half way so neither team got an unfair advantage (interpret this how you want to). 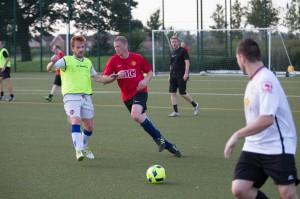 ROSGW made an early break going 3-0 up, compliments of an impressive hat trick from team captain Ricky Edwards. S&M retaliated with an audacious goal from Steve Weller from the half way line, ultimately spurring his team to a 5-3 victory.
Whilst everybody involved brought their game face, a few players deserve a special mention - Jack Broome for a stand out performance and two goals, Ricky Edwards for an early hat trick and some “robust” tackling, Nige Megson for a solid presence in midfield and Benoit Durand for delivering on energy and perseverance throughout the match.

Gracious in defeat, Ricky Edwards said “It was a really good opportunity for all areas of the business to come together. The match was really enjoyed by all, we were really pleased to have gone 3-0 within the first 20 minutes, however tired legs got the better of us and a few errors allowed the SG Sales Team back into the game. They played really well and made a great come back. Hopefully we’ll see a re-match in the future.”

Neil Benbow, Sales and Marketing’s visionary team captain, praised his squad for their commitment to the cause in tropical conditions, “I feel the event was a great success for both the participants and the business as a whole, I’m optimistic that this could become a regular fixture in the calendar.”

They think it’s all over but there’s definitely the appetite for a rematch.

Mark Haase, SG World CEO said “As a company we’re delighted to support activities like this which let people play together as well as work together. This is us “walking the talk” as we look to build on our Best Companies “One to Watch” award.”