The first UK Police and Crime Commissioner elections were held on 15 November in 41 of the 43 police areas in England and Wales, and SG World played a key role in helping councils in the North West manage the vote count using ElectIT specialist event management software.

The introduction of elected commissioners, who will replace local police authorities, is intended to improve police accountability, free up officers for frontline duties and increase public confidence in the service. As predicted the electorate response was disappointing with the turnout averaging 15% – below the previous 24% low recorded in the 1999 European elections. While the public response was not as enthusiastic as officials might have hoped, councils across the country worked hard to put in place the measures to ensure every vote counted.

SG World, a leading supplier in health and safety and visitor management solutions to companies across the UK, helped Manchester City and Halton Borough Councils to manage attendance at their vote count from start to finish on the night, and provided pre-event and live support to South Lakeland District Council in the Lake District.

At Halton Borough Council, work with SG World began well before the election and went on until the vote count finished. 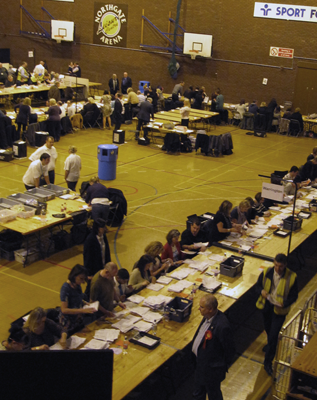 “Having SG World on board for the count gave us one less thing to worry about on the night. It all went very smoothly and brought an added level of professionalism to our delegate check in procedures,” said Christine Lawley, Divisional Manager - Democratic Services, Halton Borough Council.

SG World created and posted instruction letters and identification wristbands to the Halton Borough Council Returning Officers and other designated participants, to manage the traffic ahead of arrival on-site. Authorised entrants to the vote count simply showed their wristband to security staff at the venue, had it scanned to have their entry authorised using a simple “red light-green light” traffic system. ElectIT’s real-time attendee exit and re-entry tracking means that a participant’s wristband cannot be re-scanned once they have been checked in to the venue, ensuring that only approved persons will have access to the vote count.

Manchester City Council, which has worked with SG World for elections in the past two years held the largest vote count in the North, managing votes from Bolton and Stockport. Multiple elections officials from different councils were on site, providing the effective identification and entry control key to safeguarding the results of the election and ensuring there are no disruptions during the vote counting by unregistered visitors.

“SG World made sure we were completely prepared for the day and the ElectIT software was very easy to use. It was good to have the added safety net of telephone support during the count even though we didn’t need to use it,” said Claire Marsh, South Lakeland District Council, Electoral Services Manager.

A scalable solution, Elect-IT and its associated services can provide as much, or as little, support as a Council might need, and to fit most levels of events management budget.

“Large or small, every council shares common goals in using ElectIT - preserving the integrity of the vote count and maintaining a secure environment,” Adam Casey, Head of Operations for SGWIT, SG World’s electronics division, said. “Obviously an election involves high profile candidates who may be running under controversial circumstances so a council needs a way of controlling unauthorised access.”

Previous article Asset Management Software Installed in Schools & Academies
Next article Competition Winners Swap a Forklift for a Ferrari
We are open Monday to Friday from 8am to 4pm. Give us a call on 01270 588211