SG World is joining with local businesses, government and schools across Crewe to support a campaign to improve attendance and punctuality in local schools.

The campaign, 'Every Minute Counts' aims to build on steady improvements in classroom attendance over recent years.

In addition to a message of support for the project directed to parents and pupils in Crewe, and posted on the Every Minute Counts project page, SG World will be donating silicone wristbands as a prize for schools with an improvement in attendance at the end of the project to distribute to the children who have improved on arriving at school on time.

According to the Cheshire East Council, "Evidence shows that children who miss periods of school at a young age are less likely to succeed academically and more likely not to be in education, employment and training (NEET) after the age of 16.  Punctuality is also a major focus: if a child is late for school they could miss the most important part of the lesson and find it hard to catch up." 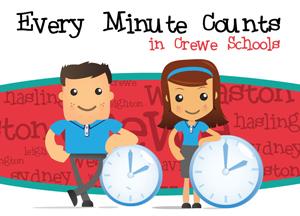 Previous article HSE Spot Checks
Next article Ladder Amnesty Offers Businesses Chance to Trade in Dodgy Ladders
We are open Monday to Friday from 8am to 4pm. Give us a call on 01270 588211