SG World’s Centurian Club, which recognises the achievements of their longest-serving members of staff, celebrated some key milestones at their annual lunch this year.

On Monday 17th October, SG World’s ‘Tufty Club’ (a term fondly coined by late Chairman Arnold Haase) gathered for lunch at Cranage Hall. Enjoying a much finer lunch than the usual working day, the Tufty Club indulged in a spot of private dining with the Board of Directors, to celebrate this year’s long-service milestones.

Not wanting to miss out on the celebrations  were some of SG World’s longest-serving retirees, who also joined the festivities. Shelagh Haase also joined the ‘Tufties’ on behalf of her late husband Arnold, and alongside her son Mark Haase (SG World CEO).

This year, the Tufty Club, which is exclusive to those that have achieved over 20 years’ service, celebrated that over 1 in 4  of SG World employees are now members. New mebers, Lisa Pountain (Production Control Advisor) and Carol Davies (Accounts Receivable Manager) were awarded their 20 Years’ Service Awards at this year’s lunch. And, for the first time in SG World history, a 40 Years’ Service Award was presented to Paul Justice.

Lisa Pountain said: “20 years have gone by so quickly, where has the time gone? I think I’ve been with SG World for 20 years because of the people, they are what make it. I do enjoy coming to work – it’s a really nice environment here and I’ve never had that ‘Sunday night’ feeling with SG World. I’m really pleased to be a member of the famous Tufty Club and we’ve had such a lovely time at the annual lunch today!"

Carol Davies said: “It certainly doesn’t feel like it’s been 20 years, it’s passed so quickly. I really enjoy my job and I really like the people here – that’s probably why I’ve been with SG World for such a long time. We’ve had a really nice time at the annual lunch today – it was great spending time with the other ‘Tufties’ and catching up with the retirees was lovely, too.” 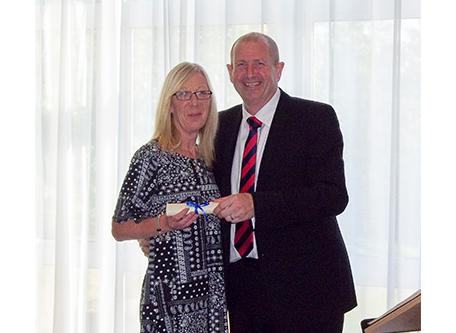 As well as their Tufty Club, SG World also celebrates the service of staff  achieving 5 and 10 years’ service. In October, an additional 5 members of staff achieved the accolade,  earning themselves, amongst other things, a celebratory chocolate cake to share with their colleagues!

Having such a high number of colleagues achieving their long service awards is testament to SG World’s commitment to supporting its staff and understanding that those who are happy at work will do their best for our customers. The company hopes to present many more long service awards in the years to come and will continue to help and support good people as they build their careers at our company.

Previous article Top 10 Contractors in School Risks (and how to avoid them)
Next article Nifco Case Study: Making an Unmanned Reception Work for You
We are open Monday to Friday from 8am to 4pm. Give us a call on 01270 588211